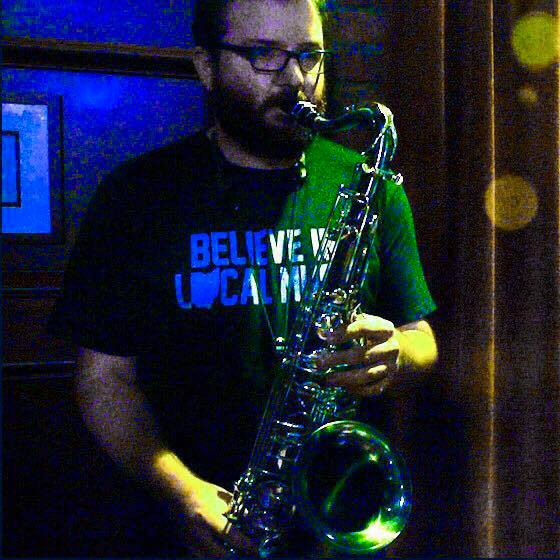 Born and raised in northeast Ohio, Matt has been playing music in the Cleveland area for nearly his entire life. From a young age, Matt's appreciation for jazz, brought about by the Frank Sinatra on his grandparents’ radio, made the saxophone an obvious choice of instrument. Since the 5th grade, it was his dream to be a sax player. Being raised on the musical stylings of The Beatles, Eric Clapton, Pink Floyd, Steely Dan, Earth, Wind & Fire, Stevie Wonder, Marvin Gaye, Aretha Franklin, Ray Charles and many others, Matt saw the ability to fit the saxophone into just about any type of music. While Matt had studied Jazz at The Ohio State University and shared the stage with jazz bands under the direction of Paul Ferguson, Dave Sterner, Ernie Krivda, James Masters, Shawn "Thunder" Wallace and more, his innate love of Rock & Roll left him with a desire to be in a rock band. A fateful meeting of Jen and Evan in the downtown Cleveland Heinen's lead to the discovery of his favorite band, Kiss Me Deadly, who just happened to be searching for a baritone saxophone player. Gathering inspiration from his jazz heroes like Sonny Rollins and John Coltrane, and bringing influence from legends like Dick Parry, Bobby Keys, and Clarence Clemons, Matt has formed a unique sound within KMD, providing funky bass lines at times along with raging sax solos.